In the tradition of Lao babyhood, all infants have their heads shaved for the belief that it will grow lustrous and strong. (For whatever else, I don’t know) This tradition is oft suggested to newborns, which is when my mom suggested we shave Humnoy’s head. The kid still had vernix pasted on his vagina-squeezed, oblong head when #AznGrandma about busted out the buzzer. Being the overprotective and wannabe-natural boho mommy I was, I absolutely refused no matter how unfortunate his hair journey started.

Humnoy had this weird, old-man hair when he was an infant: smooth/fuzzy on top; long on the sides and back. Shit was a M E S S. It wasn’t up until he was a full-blown toddler that he grew out of the old-man look and started showing growth and, to my softness for unique hair traits, perfect little brown spirals. I knew waiting out was going to be worth it. I thought, “Oh gee golly, I’m sure glad I didn’t listen to my crazy Lao mother because look at his hair now!”

For what seems like every public outing of his life, I’ve gotten the question: “When will you cut his hair?” usually right after they are offended/surprised that the little girl they are fawning over in the shopping cart is actually my first-born son, who’s never ever had a haircut. I would answer, “Well, I don’t plan on it really, [why?]” What is it about the length of a child’s hair define who they are? Humnoy was always quick to say, “I’m a BOY!” when I’d repeat my, “Oh, HE’S [insert his age]!” I was fiercely proud that I did not ever force him to get a haircut. For what? So strangers can see “who” they’re talking to? No way. Buzz off.

There was finally a time GH and I decided that, yeah, sometimes maintaining his brown curls was more work than not. One day, he got his hair so matted that he formed a baby dreadlock. I thought, “Crap, maybe he does need a haircut” but then he took another bath and fresh, new curls appeared after the baby dread was cut off, along with all my doubt. (It is now in a Ziploc bag in our kitchen because I’m fucking crazy like that). The only other time was when we were reviewing how he’s going to prepare for preschool. I hesitated on my motherly instinct only because I know how cruel people, even preschoolers, can be. I think we decided he would get an actual haircut when he enters Pre-K 4 this coming school year.

Ironically at one month before he was to turn four years old, his eligibility age for his preschool, it was clear that it really wasn’t up to me at all. Not then, not now, not never and Humnoy and his preschool scissors made that very clear (cut) while Lanoy and I were taking our nap, the time when Humnoy should be “quietly playing” since he’s given up on home naps. Long gone are naps for him, long gone are his beautiful baby curls and long gone is all my gushiness for his own hair on his very own head. ‘His hair, his body, his choice,’ isn’t that how it goes or whatever-someshit?

When did you (or they) cut your kid’s hair?

I left my kids and husband at home and celebrated the Day of Love with bright cherry lipstick. The guy was taller than me so my lipstick didn’t stain his collar but it did stain his shirt as my pout landed on his shoulder. I went out on Valentine’s Day without my family and I had a great time hanging all over other men.

All dozens of them, all in one night, every Saturday so Valentine’s Day 2015 was no exception since I have been doing this regularly. Thankfully, GH and I don’t really buy in to the Valentine Schmalentime mess so off I went to leave lipstick marks on everyone instead of my husband. He got his night with me the evening before so I’ve met my Shitty Wife duty.

I’ve got my week jam-packed full ‘o strange dudes: Sunday, Monday, Tuesday and, of course, Saturday. I have restricted my addiction to a few nights this week but I could do it 7 days a week, 52 weeks a year. If I wanted and was up for it, I’d go every night and rotate a few dozen partners to dance with within my local social dance community.

Hope he gets the lipstick mark out.

Who or what did you/didn’t do on Valentine’s Day?

What time of the year do you have your family photos taken?

It’s that time of year again.

How far away are you from the last year of your 20s?

‘My holiday wish for you is to enjoy this Winter more than I am.’

Seattle weather can suck it!

Theek, GH, and the Noys

Are you counting the days until Spring/Summer too?

I’ve been obsessed with the iPhone since I got the third generation back in 2008. Six years later, I don’t know if I can live without it. It keeps me “organized,” in touch, and keeps my selfie game in check. Finally figured out how to showcase only the important things on my phone: de-clutter with a whole lot of adorable.

Just fucking kidding. I still am a hot mess.

I can’t tell if motherhood has really screwed me over (more than it has) or if family movies have really stepped up their emo game. I have cried at commercials, sure, but an animated, action-adventure movie? This latest movie was seriously no exception because not only did wet, hot things roll down my face (again) but the kids and I were cheering on the characters. Seriously, the last time we did were all rooting at the screen characters was *cough* kidsstayupwatchingTheWalkingDeadwithus *cough* In “How to Train Your Dragon 2” (HTTYD2), we got all of it: action, friendship, and heroism. I especially loved the reunited love story the mostest. I’m such a sucker for reunions because I hate losing things, ‘know what I’m sayin? Ugh. You also can’t go wrong with dragons. DRAGONS! And especially, widdo baby dragons. So kewt.

Enough of the movie, let’s move on to the the best part of movie: snacks. The good people over from DreamWorks basically tossed us the awesome gift of calories and sugar, which I have never been mad at someone for doing so, for my family to enjoy while watching one of the best films of 2014. We got to nosh on buttery popcorn and candies like Red Vines and Sour Patch Kids (which are VEGAN, wut), along with some longer-lasting goodness in the form of the newest addition to our toy family: Toothless action figure! Toothless is the dragon companion to Hiccup, the protagonist of the HTTYD movies, and he’s one of those cute dragons I was talkin’ about.

If you haven’t seen any of the films from the HTTYD franchise, go-go-go now and enjoy a family-friendly animation that will have you cheer and/or cry from start to finish. Yes, I cried at the old love reunion! I recommend this particular film because dragons are so in right meow and if you aren’t on that dragon bandwagon, this is a great way to get the whole family started! Also, it’s really fun animation with really memorable characters and that’s probably what you’ll get out of it rather than dragon pop culture. So, this will be a family favorite, for sure!

Haven’t seen “How to Train Your Dragon 2” but want to experience the animated adventure with dragons and their trainers in a faraway place?

2) a Toothless action figure to call your own

The underage group had no idea who we even were. I guess if your birth year has two 9’s in it then you wouldn’t have any clue why we had a bloody bag of a human sex organ. The sex organ was fake and so was the blood. The kids in that group awkwardly laughed it off when we tried to clue ’em in with
1) the names of our costume inspiration (Nope)
2) the infamous headline story (Nope)
3) the actual story of who we were and why we looked like murderous homebodies. (Still NOPE)

The rest of the well-aged party knew and understood the genius behind the costume. Maybe next time I need to make myself more clear-cut in our next couple halloween costume ideas.

Do you know who we are?

I’d like everyone to meet Prin– no, Queen Lanoy.

When you Google the terms “kid photography,” do not be surprised when you see a bunch of images of kids and not photographs by kids: a kid-kid photographer, who takes photographs. I keep track of my children’s development by Googling all sorts of shit yet Google did not tell me what age children know how to take selfies, choose filters, and change shutter speed. All things that my toddler and not-in-preschool preschooler know how to do when they jack my iPhone and leave little kid photog gems. Using kids’ unedited imagination, feel free to see and add your own mini photog’s #viewfromdownthere to show the world through their eyes.

The grocery store with two kids under the age of four can be absolute horror if you don’t plan your time or aisle routes well. I truly despise grocery marketing tactics when they place brightly-colored sleeves of candy at toddler eye level so I, the already flustered mom with two kids under the age of four, would have to deal with toddler meltdowns. My tried and true strategy has been The Back and The Buggy: one kid in the Ergo carrier, one in the shopping cart.

Here’s where you can view the rest of the series: Kid Photog Series

How do you run errands effortlessly without alcohol? 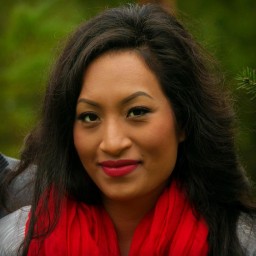 Laotian-American (wife, mama, teacher, dancer, and friend). Because you had no idea there was such a thing until now.